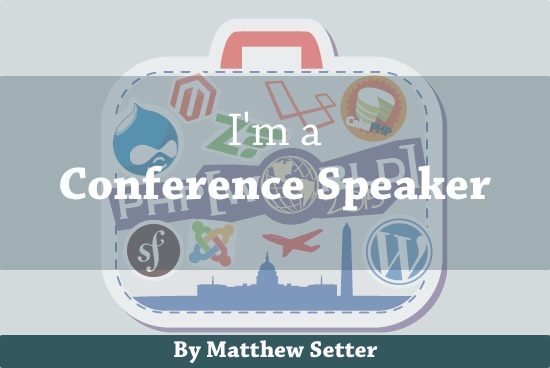 At long last, after numerous attempts submitting talk proposals to conferences around the world, I’ve been accepted to speak at php[world] in Washington D.C., this November.

That’s right, I’m a conference speaker. At long last, after numerous attempts submitting talk proposals to conferences around the world, I’ve been accepted to speak at php[world] in Washington D.C., this November. Talk about feeling over the moon! I’ve wanted to be a conference speaker for so long; so the realisation of this goal is priceless.

Now the funny thing is, at first I didn’t even know I’d been accepted. I only found out when I saw a tweet, from Gary Hockin, congratulating me and saying that he’d have to attend the conference. I thought to myself, “what are you talking about mate?”

So I did a quick check of my emails, and there was the acceptance email from the php[world] organisers, accepting, not one but, two of my talks which I’d submitted for the conference. Excitement, and jubilation set in, followed by a bit of nervousness. Hey, I now have to deliver two talks in front of quite a potentially large number of people – and not stuff up!

But I put that nervousness aside for a while and jumped on social media (twitter, Google+, LinkedIn and Facebook), sharing with anyone and everyone I knew, about the good news I’d received. As a result of that, and Gary’s tweet, Twitter lit up.

I can’t say enough just how thankful I am for all the support I’ve been given, by so many people; some I know, so many I’d don’t – yet. I lay awake that night, unable to go to sleep, wondering what it would all be like when I deliver the talks.

The next morning a plan began to take shape, as I only have between now and November to have the two talks written, rehearsed, and refined. Being a first timer, I wasn’t quite sure how to approach it? As always, in moments of doubt and question, I took to Twitter and asked for help.

Again I received some great advice, particularly from Rob Allen. Rob gave me a link to a GitHub repo which has a wealth of resources on public speaking. And in addition to that, I found speaking.io, which also has loads of information.

Where To From Here?

Where to from here? Well, to keep it short and sweet, I’m planning to spend July getting as much done as possible on both talks, such that they’re at least at the first draft stage by the end of the month. Then I’m planning to send them out for review and critique, so I can find all of the things which need further work and refinement.

After that, I’m planning to present them, ideally at user groups, otherwise, to my wife, daughter, friends, and family. Regarding the slides, at this stage, that’s too far away to be concerned of as yet. But I’ll get back to that once the talks are several revisions in.

How exciting! Stay tuned for more as the work progresses.

You might be forgiven for thinking that, with all the excitement of being accepted as a conference speaker, my previous excitement with launching a podcast had been forgotten? No way! That’s still being moved forward, time permitting. Since the last update on it, here’s what’s been achieved:

Well, after receiving loads of great suggestions, especially “Setter Injection” from Paul M. Jones, the one I’ve gone with is the suggestion from Stephan Hochdörfer and Andreas Heigl – Free the Geek. It has a good combination of what I’m after, along with a certain cool/unique factor. It’s not live yet, but the domain name is, what for it, freethegeek.fm. Cool huh? I think the .fm gives it a certain je nais se quois. No? BTW – it’s not live yet.

All that really needs to be done now is to get the site live and plan out the first episode, oh, and choose some music. So, I’m still on track for the 1st of next month to launch the first episode. I’m really excited, though I know it will be a bit rough at first. But in time it will get better.

Filed Under: Public Speaking  Tagged with: